Same day tickets are only available at the door.

To buy tickets for a future date:

Admission Fee:
$7 for Adults
$5 for Seniors/HI Residents/Military/Veterans
FREE for Members
FREE for Children 12 & Under (accompanied by an adult)

The earliest Chinese to arrive on Maui came on trading or whaling ships. It was these men who helped to build tunnels and irrigation systems through the mountains. If you’ve ever driven the famous Road to Hana, you’ve seen outstanding examples of their labor in the East Maui Irrigation System of bridges. During the years 1852-1898, many thousands of Chinese came to Maui to work on sugar plantations and in sugar mills.

Chinatown in Lahaina began as one-story shops and housing on Front Street, and as more Chinese were attracted to the area, two-story wooden buildings were built to accommodate them. But the Chinese immigrants maintained social and political ties with their ancestral home and in the early 1900s, they formed the Wo Hing Society. At one time, it was a branch of the Chee Kung Tong (a fraternal society with chapters worldwide) but it is no longer affiliated. The society was formed to nurture the ex-pat community, providing social contacts, support in times of crisis, and housing for retired workers. It also supported the revolutionary activities of Dr. Sun Yat-sen, renowned as the Father of Modern China, and first provisional president of the Republic of China.

The society recognized the need for a social meeting hall. The first hall dated to the late 1800s, but was replaced in the early 20th century with the attractive two-story building that still stands on Front Street. Upstairs is a temple with an altar for religious ceremonies. Downstairs was the social hall, which serves as museum space and a gift shop today. Engraved on the calligraphy boards around the temple are characters for Wo, meaning “peace and harmony” and Hing, which means “prosperity.”

In 1983, Lahaina Restoration Foundation took steps to restore this valuable site for Lahaina. Under a long-term agreement with the Wo Hing Society, the foundation provided funds to bring the buildings back to life and maintain them as a museum.

Next to the walkway in the frontyard is a bronze bust and marble pedestal monument to Dr. Sun Yat-sen, courtesy of The Sun Yat-sen Foundation for Peace and Education. From 1879 to 1910, he made six trips to Maui and spent more than seven years in the islands preparing for the 1911 Chinese revolution. Dr. Sun’s older brother, Sun Mei, a silent hero behind the revolution, operated a large cattle ranch in Upcountry Maui. 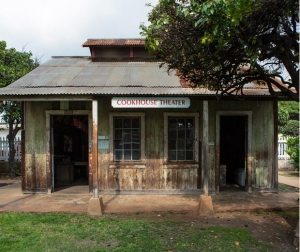 In addition to the clubhouse and temple, Wo Hing Society built a cookhouse, or community kitchen, which is the low wooden structure placed in the backyard for fire safety. When the members hosted social functions for hundreds of people, the adults would cook in their huge woks, steamers, pots and pans over a wood fire, and the children would do the dishes. For the Chinese, the kitchen is the center of family life, and this cookhouse ably covered that role. Today, the cookhouse is used as a showcase of this time as well as a small theater, screening the film Finding Sandlewood Mountain, a documentary digital feature film shot in Hawaii and China that chronicles the legacy, providence, history and accomplishments made by Hawaii’s Chinese Families.