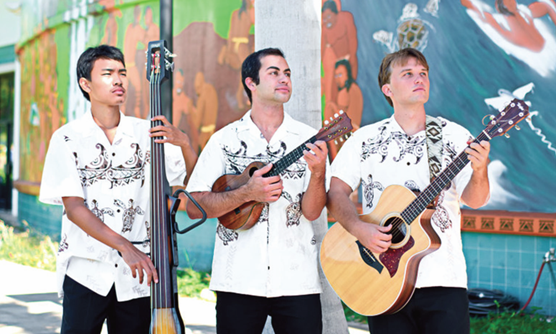 Kuikawa is comprised of Lukela Kanae (left), James“Koakane” Mattos (middle), and Joshua Kulhavy-Sutherland (right).They met in 2016 as students in the Institute of Hawaiian Music atthe UH Maui campus. As avid fans of Hawaiian music andlovers of good harmony, they quickly formed agroup andbegan to perform around the island of Maui.

Lukela Kanae is an alumni of Kamehameha Schools Maui Campus, where he was always surrounded by Hawaiian singing and hula. He played bass guitar with the Kamehameha Schools Hawaiian Ensemble and began developing his singing voice after joining the Institute for Hawaiian Music.

Joshua Kulhavy-Sutherland was home schooled and entertained himself with guitar and ukulele. After graduating from college, he entered the Institute of Hawaiian Music and formed the band Kuikawa with Koakane and Lukela. Limited seating is provided on the lawn; blankets, mats and low beach chairs are welcome. This ongoing Hawaiian Music Series program is sponsored by Hawai‘i Tourism Authority, the County of Maui Office of Economic Development with support from KPOA 93.5FM.